The Curious Incident of the Dog in the Night-Time

Posted on September 3, 2017 by Adriana Butnariu

I have just discovered Mark Haddon and I must say that I am in love with this novel: The Curious Incident of the Dog in the Night-time (2003). 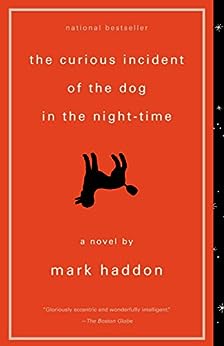 Long before it gave him bestseller status, Mark Haddon was an author, poet, cartoonist and abstract painter -and he previously wrote the Agent Z series of books.

The stories are written for young teens and are full of the joys of daydreaming.

Ben is the narrator and he has something special: his hallucinogenic imagination allows him transport himself beyond the dreary boundaries of the suburban street where he lives.

The publication of The Curious Incident of the Dog in the Night-time (2003) brought Haddon critical applause, commercial benefit, and awards. It’s not hard to see why.

Mark Haddon was born in Northampton in 1962.

He graduated from Oxford University in 1981, returning later to study for an M.Sc. in English Literature at Edinburgh University. He then undertook a variety of jobs, including work with children and adults with mental and physical disabilities.  He also worked as an illustrator for magazines and a cartoonist for New Statesman, The Spectator, Private Eye, the Sunday Telegraph and The Guardian (for which he co-wrote a cartoon strip).

His first book for children, Gilbert’s Gobstopper, appeared in 1987 and was followed by many other books and picture books for children, many of which he also illustrated. These include the ‘Agent Z’ series  and the ‘Baby Dinosaurs’ series. From 1996 he also worked on television projects, and created and wrote several episodes for Microsoap, winning two BAFTAs and a Royal Television Society Award for this work.

In 2003 his novel, The Curious Incident of the Dog in the Night-Time, was published and has been hugely successful.  It is the first book to have been published simultaneously in two imprints – one for children and one for adults. It has won a string of prestigious awards, including the 2003 Whitbread Book of the Year. His second novel, A Spot of Bother, was published in 2006 and shortlisted for the 2006 Costa Novel Award.

Christopher John Francis Boone knows all the countries of the world and their capitals and every prime number up to 7,057. He relates well to animals but has no understanding of human emotions. He cannot stand to be touched. And he detests the color yellow.
This improbable story of Christopher’s quest to investigate the suspicious death of a neighborhood dog makes for one of the most captivating, unusual, and widely heralded novels in recent years.

http://about.me/adriana.butnariu
View all posts by Adriana Butnariu →
This entry was posted in autism, books, child care, literature, writing and tagged Mark Haddon, The Curious Incident of the Dog in the Night-Time. Bookmark the permalink.